Semaphore can be considered as a variable or Data Structure that can be used to archive mutual exclusion in a Parallel Programming environment.

So getting a tablet is like acquiring a lock in the train line so that other trains that are in need of acquiring the line need to wait till the train reaches the next station and release the lock ( give the tablet back).

This signal system still in use in Sri Lanken Railway line in some parts where there is only one rail track between two stations. 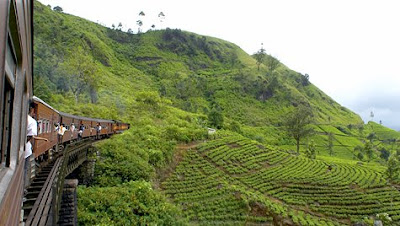 Above explained situation is an example for the Binary Semaphore. where it supports two operations up() and down() . A binary semaphore can have only two values 0 and 1 .(NOTE that up() , down() operations are atomic operations )

when someone call a up on semaphore if its value is 0 then it increment it to one and return so that execution can proceed. But if its value is 1 then that up call block the process execution till some one make the semaphore value to 0 (wait till a down call);

This little idea is extended to an idea called Counting Semaphores there we can have more than two values for the semaphore. So that process can call multiple up s /down s till it get blocked.Which means more that one thread can pass the through before it blocked.

Now its time to look in to how this going help to solve a mutual exclusion problem.

Following is a famous problem in Concurrent programming text books lets see how we can solve it.

Bill and Ben work in a cafe that specialises in a soup and sandwich combination.

Bill makes two rounds of sandwiches while, at the same time, Ben makes two bowls of soup. When the sandwiches and soup are ready Bill and Ben each, they serve a soup and sandwich combination to a customer. These actions are repeated throughout the day.

So as the Problem explained Before Serving sandwiches and soup Bill and Ben need to sync up.

Which means there can be no two customers in the shop at any time that has only served one item.(soup/sandwich)

To implement this Processes I'll be using the Java Language. Java has inbuilt semaphore implementation in java.util.concurrent.Semaphore

Its a counting Semaphore implementation. For this case since we only need a binery semaphore I'll will use it with permit value 1. which means only 1 thread is permitted to acquire it at a time.

First lets look in to the code.

So if we looked in to the code Bill and Ben are implemented as two runnable s . At the start We create a Cafe allocate Ben and Bob work and tell them to start work.

If we look in to Bill Process what it does is it creates two Sandwiches and tell that I, m done by releasing bill semaphore and waits till Ben finished by trying to acquire the ben semaphore.

And Ben does other way around.

So it guarantees that Ben cant serve till Bill finish and Bill cant till Ben finishes.

So at the end when the processors executing parallely the condition of there can be no two customers in the shop at any time that has only served one item.(soup/sandwich) is satisfied.

Following is sample console out put I got


You can see the condition is satisfied.
Hope this helps to improve your understanding on Semaphores...

Sheroug said…
Great example, been having a problem understanding until now. Thanks.
May 9, 2011 at 12:03 PM

Popular posts from this blog

Web Service Orchestration with an ESB

Web service orchestration can be thought as a process of combining and coordinating of different web services based on a predefined pattern to give a desired result. Web Service Orchestration is one of many features that comes with an ESB (see [1]). Even though Business process servers can be used for this kind of tasks , using a business process server for a simple service orchestration scenario will be a waste of time. So in this blog post i’ll explain how we can use an ESB for service orchestration which will be a much simpler task.. I’ll be using WSO2 ESB 3.0.1 for this. Let’s 1st come up with a scenario. There are consultants who can give us some advices on life when we are in need. So lets try to have a consulting service. But to consult a “Life guru” or the consultant 1st we need to get a ticket and then go to the “Life guru ” with that ticket. Following is the high level message flow for this scenario 1) Client invoke ESB proxy service with Parameters name and ag
Read more